From Robert Gennet, Sumac's Music Specialist (or as your kids know him, Mr. G)

I’ve had the great pleasure of teaching your kids music and opening their ears and minds to different styles, genres and ideas. Since each class is only 30 minutes long, I often play short snippets of songs as examples. I hate shortchanging the full listening experience, but time is always of the essence. So with the spirit of listening in mind, I made a Spotify playlist with all the songs I played so far. That way, students can revisit the songs in full and dig deeper if they’d like. I added a few extra tunes by some of the artists at the end for good measure.

I hope you will encourage them to listen and talk to them about it after. So you know what we have covered so far, I listed a recap below. I’m looking forward to the final stretch and the end of year show. I hope you saw my recent posts on Parentsquare with mp3’s and lyrics. There will be a few more coming soon as we are adding some Spanish songs. It would be great for students to practice their songs at home, as I have encouraged them to do.

Let me know if you have any questions or want suggestions for more music to listen to. I am also curating some extra playlists should anyone want to expand their listening and will post them along the way.

See you soon!
Mr. G
rgennet@lvusd.org
Here are some of the things we discussed and worked on with the music on this playlist:

1. Igor Stravinsky’s Rite of Spring, which caused a riot when it premiered in Paris in 1913, in some part due to the strange choreography, as it was a ballet. The surging pulse of the music was new frontier for classical music nearing the end of it’s dominance on popular culture. Stravinsky caused a second riot with his controversial arrangement of the Star-Spangled Banner in Boston in 1944. He was one of the last major composers of the Classical era and created music that was in some ways ahead of its time. The Rite of Spring is now heralded as a masterpiece.

2. John Phillips Souza’s marches, two of which are our National March (“Stars and Stripes”) and the Official March of the US Marines (“Semper Fidelis”. There’s also “The Liberty Bell” (which some of you parents may recognize from a certain BBC comedy show theme) and a circus march (“Rolling Thunder”) which had faster tempos. His marches were so iconic, the age of Marches died off when he did.

3. Louis Armstrong, who invented scat singing by accidentally knocking his lyric sheet off the stand in the middle of a song (“Heebie Jeebies”). He also ushered in improvising in jazz and became an iconic figure in American music and culture. Later in life, he knocked the Beatles off the charts in 1964 with “Hello Dolly” then followed it up with “What a Wonderful World” which the kids are all singing in the end of year show. Louis was the first jazz musician on the cover of Time Magazine and is still regarded as a legend. 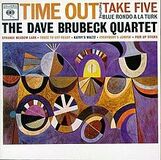 4. Dave Brubeck, who brought odd time signatures into jazz and modern music. His 1959 album “Time Out” was the first million-selling jazz album and he was the second jazz musician featured on the cover of Time Magazine. His most famous song “Take Five” is in 5/4 time and was written by longtime saxophonist Paul Desmond. We also listened to other songs using odd time signatures including “Subdivisions” by Rush (7/4), Lalo Schifrin’s Mission Impossible theme (5/4), “Solsbury Hill” by Peter Gabriel (7/4) and the Allman Brothers “Whipping Post” (11/8) 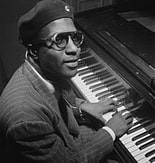 5. Thelonious Monk, who used rhythm to bring beauty and possibility to dissonance. Everyone walked in to “In Walked Bud” (fittingly) which features some really fun scatting from Jon Hendricks. We heard both sides of Monk from the piano stabs that start off “Evidence” to the gorgeous slow harmonies of “Ruby, My Dear”. Monk’s idea of “Ugly Beauty” is always interesting to listen to and he is a standout amongst jazz pianists. Monk is second only to Duke Ellington in having his songs covered by other artists. And yet Duke wrote over 1,000 pieces of music while Monk only composed 70. 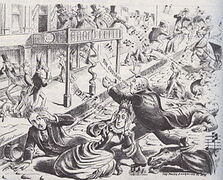 6. Roosevelt Sykes, blues piano player. We discussed the origins of the blues in the early 1900’s and how it migrated up and down the Mississippi to seminal blues towns like Chicago, St. Louis and New Orleans, all three of which Roosevelt Sykes lived and played in. The sound of the trains infused the rhythms of guitarists and piano players alike, giving the early blues and boogie woogie a similar beat and style. We made up our own blues song about breakfast foods, which was quite creative and fun! We also focused on syllables and how they help lyrics work with the rhythm of songs, which we wove into practicing the lyrics for our songs.
All in all, we've had a great time. I hope you enjoy the music and have a wonderful Spring Break!

Below is a link to the Spotify playlist- the link should open in a browser window, which will only offer you snippets of songs. Down on the left there is a bright green button that says PLAY ON SPOTIFY. By clicking that, it will open the playlist in Spotify and you can hear full songs. Spotify is free to download and easy to navigate. Go to https://www.spotify.com/us/ and click DOWNLOAD at the top. Install and have a ball!

​PS- Though Spotify is free, the ads can get annoying. I’ve found the subscription to be well worth the huge amount of available music and lack of ads. If your kids are curious about music, it is a fantastic place to discover so much and create their own playlists. Plus I'll be curating playlists off our lessons to enhance their experience and widen their scope of listening.
Sumac's music program is made possible through parent donations to Sumac's Parent-Faculty Association (PFA).